The list below is compiled by the enforcement authorities of the European Union to clarify extraordinary circumstances. Please note, this is an example list and not legally recorded. Several judges have already decided against the list in favour of the passenger.

3) Illegal act
These include terrorism or the threat thereof

6) Security
The finding of a bomb (or explosives) or the threat thereof on board of the airplane, or at the airport of departure or arrival

7) Security
Hijacking of the plane

9) Security
Removing a stubborn passenger who is considered as a threat for fellow passengers and/or crew, resulting in a delay or rerouting of the flight

13) Weather conditions
In case of damage to the aircraft caused by lightning strikes, heavy hailstorms, thunderstorms or severe turbulence etc. that may affect the safety of the flight or the airplane and requires an immediate inspection or repair

14) Weather conditions
When the use of unusually high amounts of de-icers becomes necessary due to extreme weather conditions and there is insufficient supply thereof. This may lead to a delay because the airplane cannot be de-iced properly 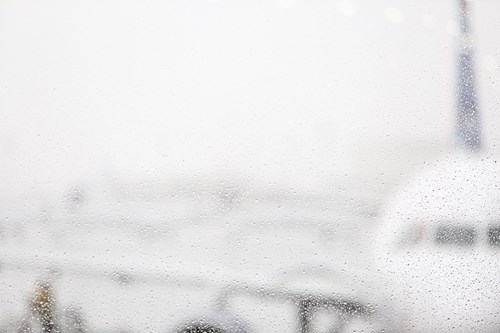 17) Birdwatching
When the plane comes into contact with a bird in flight, causing possible damage and an immediate mandatory inspection and possible repair is required

19) Unexpected flight safety issues
Damage to the aircraft caused by a third party prior to departure of a flight that requires immediate inspection and/or repair. Example: a collision of a vehicle from the airport and a plane

20) Unexpected flight safety issues
Airplane damage caused by an outside object (FOD), requiring immediate inspection and/or repair of the device.

23) Unexpected flight safety issues
The premature failure of parts that are not yet at the end of their service life (as prescribed in the applicable maintenance instructions, as contained in the approved manual or in the Maintenance Document (MPD) or in the Maintenance Review Board Report (MRBR). before the planned inspection/replacement/removal date of that part is due (if the parts are maintained according to applicable regulations)

26) Unexpected flight safety issues
All other technical defects that occur suddenly before departure or in flight and require inspection or repair before the device is considered as save for use for the planned flight, if the system or component is maintained and checked according to the required maintenance program

27) Unexpected flight safety issues
Smoke, fire or fumes on board of the aircraft, except if the problem arises with a component that is not maintained or failed in accordance with the required procedures because the prescribed operating procedures have not been sufficiently followed

28) Industry-related problems
Strikes that affect the flight performance of the airline, for example a strike of air traffic control

34) Missing the correct flight documents
By misappropriation in the preparation and submission of the documents required for the performance of the flight, due to circumstances within the control of the airline

If your flight has been delayed, cancelled or overbooked, please enter your flight details and check if you are entitled to compensation!

No hidden costs Fast No cure, no pay